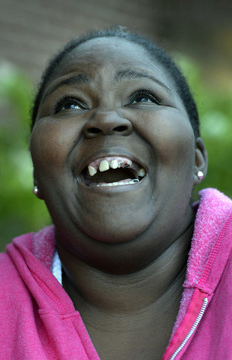 Read how Dr. Miller and his staff recently received national recognition in their work with dental implants. Reprinted from the Charlotte Observer, June 5, 2016.

“A cavity here, and a cavity there,” and pretty soon, she’d lost half the teeth in her mouth. Those that remained were decayed or broken.

At 38 and single, Terrell had become embarrassed to smile. Although naturally outgoing, she cut herself off from friends and avoided going out to eat.

Then late one night in March, while browsing Facebook, she saw an offer that seemed sent by God.

Dr. Amir Marashi, a Charlotte-based oral surgeon, was giving away dental implant surgery a $50,000 value that is not typically covered by insurance through a program he called “Second Chance.”

Terrell typed in an entry, describing how her damaged teeth had stolen her confidence. Of 200 applicants, she was one of 50 chosen for in-person interviews. She quickly reached the top 10, who were called back for a second round.

“She touched my heart,” Marashi said. “The goodness oozes out of her.”

As a dentist and a medical doctor who has specialized in oral surgery in Charlotte for 15 years, Marashi said he created the program because he wanted to give back to the community. He plans to offer it annually.

In her 20s and 30s, Terrell held jobs as a bank teller and office manager for a car dealership, and she had dental insurance. But her teeth had started going bad in college. And her insurance never covered all the work that needed to be done. The total cost might be $3,000, but her plan covered only $1,200. Sometimes she would pay out-of-pocket to get a tooth filled or have one pulled.

Because she didn’t have toothaches, she didn’t think of it as a major problem. Before long, instead of the standard 32 teeth, she had only 17.

At one time, Terrell dreamed of becoming a chef. But that no longer seemed like an option. The decline in her dental health left her self-conscious and insecure. Plus, she couldn’t eat anything but soft foods. Nothing crunchy.

“I don’t remember the last time I truly bit into any food,” she said in April, a few weeks before she was scheduled to have her surgery.

Before the surgery, Terrell met with Marashi several times at Greater Charlotte Oral & Facial Surgery offices in Pineville and the Steele Creek area. He took CT scans of her jaw that gave him an exact map of her mouth.

As part of his evaluation, Marashi determined that Terrell would be a good candidate for implants.

Implants, she learned, would not only allow her to chew again and have a pretty smile; they would help preserve her facial structure, preventing bone deterioration that occurs when teeth are missing.

Using those CT images, Marashi plotted surgery down to the millimeter. He worked with Drs. Bruce Miller and Sarah Jafari-Namin, of Charlotte Prosthodontics, who volunteered to install the implants free.

On May 6, Tiffany Terrell arrived at the Steele Creek office at about 6:45 a.m. with her mother, Linda Terrell, and her sister, Tahren Brandon.

Tiffany was both excited and nervous. She hadn’t slept much, but she said, “I’ll get plenty of sleep in a little bit.”

At 7 a.m., nurses took Tiffany to the back of Marashi’s office to one of two operating rooms.

Marashi began removing her damaged teeth, gums and bone. Into her jawbone, he implanted eight titanium posts four in the upper part of her mouth, four in the lower.

The prosthodontists, Miller and Jafari-Namin, attached temporary sets of upper and lower teeth onto the implants. These will stay in place for about six to nine months, while the bones and implants heal and the swelling goes down. Then the doctors will attach permanent dentures.

As Tiffany began waking up, someone held a mirror to her face. Still drowsy, she smiled, and when she saw her teeth for the first time, she began to cry.

In the waiting room, Tiffany’s mother sat checking messages on her phone and chatting with the staff. For years, she said, she’d been concerned about her daughter’s dental health.

Even without good teeth, Tiffany is “a beauty inside and out,” Linda Terrell said. “She has what we call the ‘it’ factor. She has what it takes to really go far.”

It was about 2:30 p.m. when the doctors and nurses helped Tiffany to her feet and walked her down the hall to the waiting room. When Tiffany saw her own smile in the big round mirror on the wall, she began to cry again.

Over the next few days, she said she barely took any of the painkillers she had been prescribed. She said she felt “no pain, no discomfort, just a lisp.”

One day after surgery, when she smiled at a colleague, Tiffany instinctively covered her mouth and looked down. But the colleague, who knew about her surgery, said: “Smile, honey. You don’t have to hide anymore.”

“That was just really nice,” Tiffany said. “I really didn’t realize how withdrawn I had become.”

For about eight weeks, while the implants bond to her jawbone, Tiffany is subsisting on a diet of yogurt, smoothies, soup and mashed potatoes. She’s looking forward to the day when she can indulge again in her favorite “guilty pleasure” cashews. Marashi has offered to buy her some.

Even now, the difference in her life is apparent. A week before the surgery, she became an aunt for the first time. Since then, she has held her niece for pictures without feeling she had to hide.

“I get to make beautiful memories,” Tiffany said. “I get to be her aunt and share a lifetime of smiles with that little beauty.”